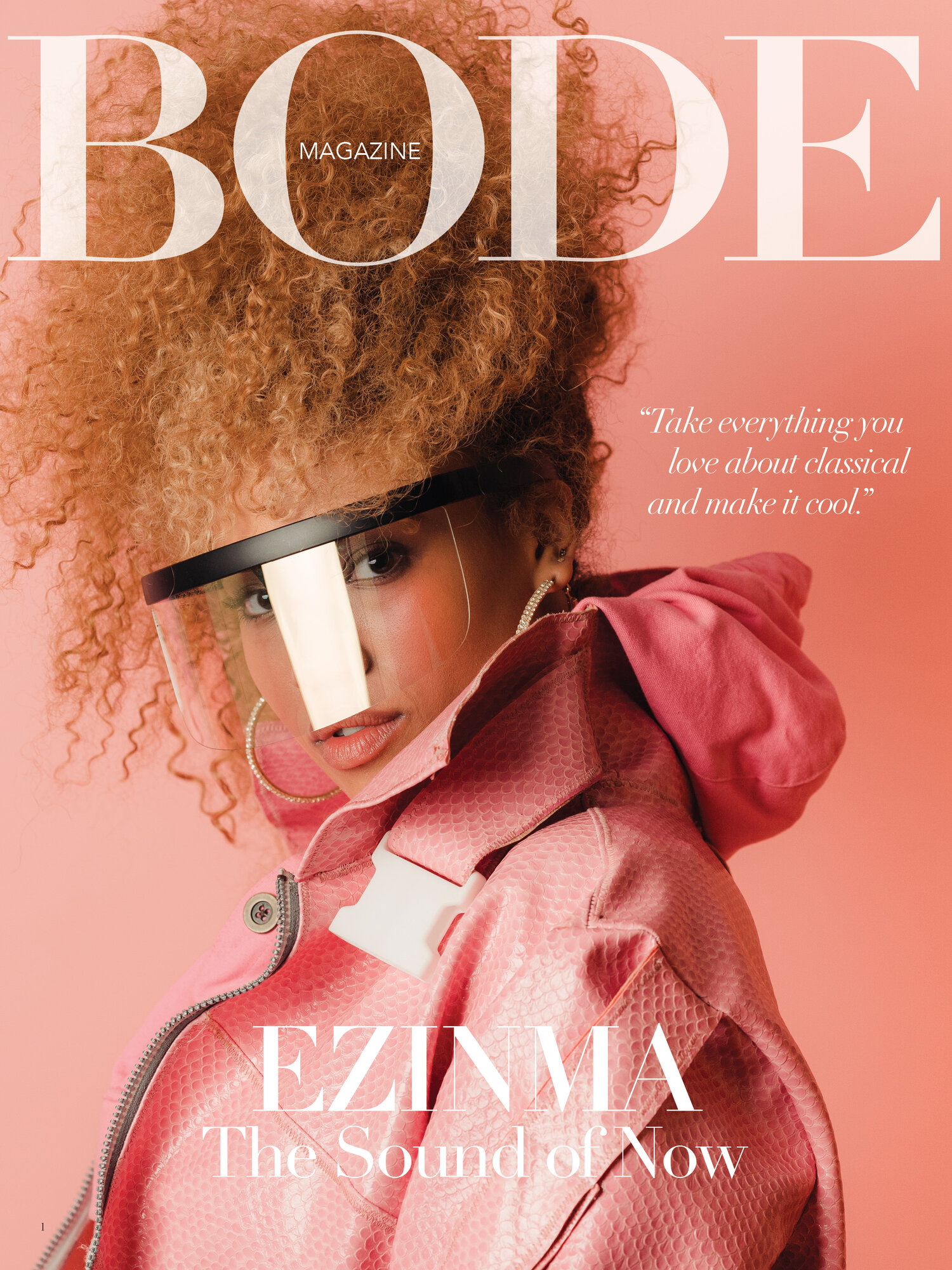 Read the article on Bode

Catapulting into digital stardom after covering viral trap hits on her violin, Meredith Ezinma Ramsay, professionally known as "Ezinma", is not a one-string wonder. Rather, Ezinma, otherwise known as “Classical Bae,” is a multi-string musician, continuously praised for her ability to blend “virtuosic melodies and orchestral soundscapes with hard-hitting beats.” It is the “juxtaposition of seemingly unrelated worlds,” the virtuosic synthesization of varying vibrations, the “classical fusion that is cinematic, orchestral, and athematic with ambient vibes” that enables Ezinma to continuously shine (and garner the attention of musical superstars like Beyonce). Whether it is her new, original music, the documentary of her life premiering at the Tribeca Film Festival,her philanthropic pursuits, Ezinma strives to connect diverse audiences through a symphony of styles composed on her own.

A notable, classically trained violinist, Ezinma was drawn to the violin at a very young age. Hailing from Lincoln, Nebraska, “a small, ‘big town’ in the midwest,” Ezinma first picked up the violin (yet to be put down) when she was three-years-old, just because there happened to be a violin program at the Montessori school she attended. “When I saw the kids playing,” Ezinma begins, “I became obsessed. I loved the sound of the violin immediately. I begged my parents until they finally caved and rented this tiny violin. I was hooked.” It was this instant infatuation with the stringed instrument that enabled Ezinma to pave her path, combining classical melodies with the hooks of contemporary creations. “I learned at a pretty young age there isn’t only one way to do things,” the violinist shares. It was her experiences growing up in a mixed-race, mixed-cultural family that influenced her work ethic and her creativity. Raised by a Georgetown, Guyanese father and a German-American mother, Ezinma’s upbringing was certainly versatile. “My dad is a mathematician, my mom is a writer,” Ezinma clarifies. “My dad is super disciplined, my mother raised me with more creativity and freedom.” This dichotomy of disciplines and cultural distinctions encountered throughout her transformative years transferred into Ezinma’s melodic musings. While being a mixed-race girl reared in the midwest often engendered feelings of otherness, Enzima always found a resonating sense of belonging with her music. “I think this inspired me musically,” Ezinma recounts of her childhood. “I was able to take a blend of influences and approaches from my life and meld them into one. This has allowed me to take classical violin and make it something entirely new.”

From her home in Lincoln, Nebraska that was always filled with the melodic mélange of a myriad of musical masters - Parliament, Bill Monroe, Bob Marley, Van Morrison, Billie Holiday, Bob Dylan, Roberta Flack, Bach, Beethoven, Mozart, and many more - Ezinma moved to NYC to pursue her passion and a master’s degree at the New School. It was there that Ezinma mastered her bow’s innate inclination for inventiveness. “When I was there, I was exposed to so many musical styles. It influenced me and pushed me to try new things,” the instrumentalist illuminated. “I learned music production and became fascinated with making my music - specifically reimagining classical music in a new context.” It was during this transformational time that Ezinma began putting a classical twist on popular music and posting her covers on social media. “It was such an overwhelming and positive response. Beyoncé reached out, and BOOM! The ball started rolling,” Ezinma beams. “Last year I signed a record deal with Universal Decca. It’s been a wild ride!” The opportunity to share the stage with Queen Bey skyrocketed classical bae’s career. Ezinma was approached to accompany the global superstar for three years culminating in her legendary performance at Coachella in 2018. “I never in a million years thought I would perform with Beyoncé,” Ezinma exclaims. “Working with her has been one of the most inspiring moments in my life. Her work ethic, attention to detail, elegance, her intentionality in everything she does, blew me away.” The famous “Beychella” performance made history with Beyoncé being the first Africa-American to headline the notorious music festival. The powerful performance not only influenced the awestruck audience members experiencing perfection in-person, but also those who experienced the process leading up to the eminent event. “Coachella was months of dedication,” Ezinma reveals. “Every single day for up to eight hours. Rehearsing, writing, arranging. I got to witness one of the greatest in the industry to build a show from scratch to perfection.” Taking diligent notes from her collaborations with some of the world’s most remarkable artists, Ezinma continues to work tirelessly to build her career from scratch to perfection.

Her lightning rise to fame in the realm of music granted her opportunities to create with Clean Bandit, Sza, Yo-Yo Ma, Kendrick Lamar, Joshua Bell, and many more. Armed with an impressive resume of collaborations, Ezinma is fired up to launch her new music in July. “The new music is so fresh and cool. There is nothing like it,” Ezinma hints about her upcoming album. “Take everything you love about classical and make it cool. I can’t wait to put it out!” Ezinma’s passion for melodies and the mixing of symphonic styles to engage diverse audiences manifests beyond the parameters of her musicianship. A Bulgari documentary on her life and her creative process will be premiering at the Tribeca Film Festival. “Viewers are going to get the chance to follow me through the stages of making my music. We start in my home studio, recording, adjusting, and writing my demo,” Ezinma outlines. “Then we go to the studio where everything is recorded. It ends with a live performance of the record. It is so cool to see how a song is created start to finish.” Though Ezinma’s success may seem like a dream come true, her path to professional progress has had its fair share of obstacles along the way. From experiences she encountered when she was young, Ezinma realized the lessons her father taught her held: “people aren’t going to see you for your talent, but your skin color” and “it isn’t enough to be good, you need to be the best.” Whether claiming her rightful spot as first-chair in her middle school orchestrapaving her professional path against a classical music scene dominated by the white patriarchy, Ezinma has always “felt a strong need to present the world with a different side of her and a new context for the classical violin.” These obstacles, however, the “ups and downs” of progress do not shake Ezinma much. “There are times I’ve been broke, I’ve been betrayed by someone I had entrusted with my career, I’ve been rejected, I’ve been in creative slumps, etc,” the artist admits. “As hard as these situations were, I’ve always reminded myself of the big picture: my purpose, my blessings, and my love for music.” Though there are plenty of wonderful moments in the entertainment industry, Ezinma advises to never “be affected by the ups and downsyou’ll get seasick.” As for herself, Ezinma proudly wears her own set of blinders. “It keeps me on my path and purpose.”

Ezinma’s path and purpose extend beyond her creative endeavors and pulls at her heartstrings, developing her nonprofit organization. “HeartStrings is a music-based youth development program for children K-5 of diverse backgrounds,” Ezinma explains. “HeartStrings has an academy where each child is equipped with a quality instrument, outstanding music instruction, community engagement activities, access to world-renowned concerts, and performance opportunities.” Ezinma’s drive to form HeartStrings comes from a place of empathy and her own experiences. “I started HeartStrings to increase visibility and access for children of color so more kids can feel like they can be seen and heard in classical spaces.” Even throughout her time in Arizona during mandated social distance regulations, the Brooklyn-based musician has maintained her path and purpose through her devotion to helping others “conquer the classical realm” and “use the violin in a more contemporary space.” “During quarantine, I’ve made it a priority to focus on music education. Creating content for school-aged children has been something that has given me purpose during these days stuck at home,” Ezinma shares. Between finalizing the credits for the documentary about her life, putting the final touches on her new music for its July release, taking an online film-scoring class at Berklee, exercising, kickboxing, practicing yoga, and cooking, Ezinma’s been staying very busy and very focused. “It’s been good! I am blessed.”

Creating content and connections with her Instagram community of over 300,000 supporters, Ezinma believes that the idea is the most important part of the social media equation. “First is always the idea. I have a journal and I’m constantly writing new ideas I have for content just so I don’t forget,” the musician begins. “I’ve done so many covers, now the focus is more on fresh new ways to present my story and my music on social media.” Throughout her time in quarantine, forging relationships with her fans and forgoing this idea of “perfection” has been her guiding Instagram light. Ezinma’s large following can be traced back to her continual authenticity on social media and her dedication to being daring and bold, even in her fashion sense. “I’m super girly and I’m a classically trained violinist, so I love gowns. That said, I also love raiding my boyfriend’s closet,” Ezinma divulges. “I love to mix masculine with the feminine. I love to mix super classy with some edge.” The talented instrumentalist’s endeavor to redefine the line between classical and contemporary seeps into the seams of her ensembles, too. “I also love statement pieces. It is so important to stand out, to be bold in what you wear.” Whether playing notes on the violinpairing outfits together, Ezinma is always revolutionizing styles to adhere to her creativity. Hoping to tour once social distancing constrictions are lifted, Ezinma is now looking forward to the release of her new music, her documentary, and is tinkering with the thought of exploring other ventures. “I want to be a woman of many hats! I would love to have a haircare line for us curly girls out there. Technology interests me,” Ezinma continues. “Especially how it relates to music education.” With “new music and incredible visuals” on the horizon, Ezinma is certainly taking the classical cosmos by storm and constructing a diverse, musical universe all on her own. Ezinma encourages everyone to join her on this harmonic adventure: “If you have an instrument laying around,always wanted to pick one up - now is your time! It’s never too latetoo early.”