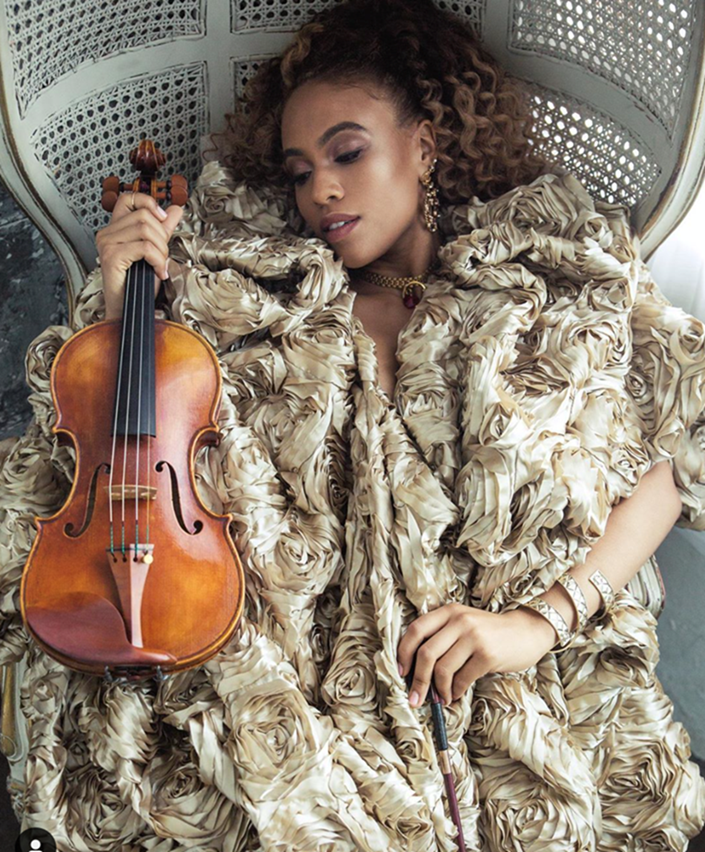 Read the article on Rival Magazine

“Classical Bae” Ezinma is constantly perfecting her craft. Many of us met her online, watching her cover pop and hip hop tunes with her classical violin, and converting us into immediate fans. We talk to Ezinma about the merging of genres, sharing the stage with legends, bettering ourselves during the quarantine, and staying sane while fighting for justice. Her insightful and intelligent responses were music to our ears:

Adinah: There're many hobbies- from soccer to ballet- that parents enroll their kids in. And with instruments we usually see more piano and guitar. What drew you to violin?

Ezinma: Violin is not the most common. I went to a pre-school in Nebraska that happened to have a violin program. My parents weren’t very musical and found it weird that I wanted to play the violin, but then they kind of gave in and I never stopped playing!

A: You’re known for blending the classical genre with a lot of pop and hip hop songs in covers. I wanted to touch on strings’ presence in pop and hip hop music throughout the decades. There’s some very iconic songs that use strings in very prominent ways. How have they influenced your artistry?

E: Strings always played a role in music throughout history, going back to jazz you have the strings tucked in and then with disco, you have the disco strings. It’s always been there as the sweet, sultry, romantic type of thing.

But when Miri Ben-Ari came around Kanye’s era, when he was first starting out and she had Overnight Celebrity (Twista ft. Kanye West). And she put the violin to a whole new level. She was kind of like the pioneer of that. There are other artists too, but she was one of the main ones to do it. I think since her, violin and strings have been used in hip hop and pop in less of the traditional way and more of a “let’s get lit”- thinking of Manny Fresh “Back That Ass Up”- I think that was the turning moment.

In terms of pop music, I used to tour with Clean Bandit. And that was a part of their aesthetic; they had a violinist in the band. It just depends.

It’s interesting because I’ve been hearing a lot of flutes in trap and hip hop music. Like Mask Off (Future). Which is interesting as well, because you never would associate that with such a dainty instrument. So the juxtaposition works well of classical music in unexpected genres.

A: So you mentioned working and touring with Clean Bandit and we also know you’ve worked with Beyonce for Beychella. Can you talk about those experiences and what have been some of your other favorite collaborations?

E: With Clean Bandit, you’re close to the artist all of the time. It was so much fun! We traveled all over Europe together and that was my first professional major exposure into a whole different world of performance- having choreo, playing for thousands of people. I was in Europe for about 6 months with them.

The Beyonce gig, it was a little bit different, because there's so many people involved. Her band is Huge! Also with Beyonce, Everything is PERFECT! There’s no room for error. With Clean Bandit there was a lot more freedom.

Another big collaboration was working with Stevie Wonder, and that was one that came up very last minute. I had just moved to New York and got this call, like hey can you come to this Central Park show in 30 minutes. I got there and no rehearsal, no charts. I was so grateful I had grown up on Stevie Wonder and knew the songs.

They all yield great results. You gotta be adaptable.

A: Other than Stevie, What other artists did you hear in the household?

E: A lot of reggae: Bob Marley, Beenie Man, Yellowman. My dad’s West Indian. And then, funk, Parliament, Earth, Wind, and Fire, Nina Simone. A lot of singer song-writer type stuff. Joan Byaz, Bob Dylan. We didn’t listen to the radio much. My parents listened to the records. I unfortunately missed out on a lot of hits in the 90s, because I wasn’t listening to the radio as a little kid, but it worked out for these other things!

A: I can definitely relate!

A: And you moved from Nebraska to NYC? What was that like?

E: Well I’m in Arizona now for quarantine, but I went to New York for school. I went to the New School for my masters degree. I came to New York wanting to be a classical violinist and play in an orchestra. And the longer I was there, and the more musicians I encountered and the more artists I met, the more I realized the possibilities there were. Coming from a place like Nebraska, you don’t see that many options for being a creative person. And being in New York you’re just like “Oh my gosh. Anything is possible.” It was very inspiring and so I met this fantastic violinist, Todd Reynolds, and working with him I learned a lot of production. I learned to use the violin in non-traditional ways. And it was a very, very eye-opening experience. Had I gone to another city, I don’t know if I would be where I am. New York just truly bought a lot of clarity to what I wanted in my career.

A: You mentioned quarantine. You’re in Arizona. How are you keeping busy and not going stir-crazy?

E: Well, I’m taking a class at Berklee music conservatory in Boston- I’m taking some film composition classes. Because My passion is writing for film and media. So actually working on my assignment. We’re scoring Iron Man so it's a crazy amount of work!

We’re getting ready to release some singles, so I’ve been doing a lot of virtual sessions. I have a film coming out for a film festival, so we’re doing final cuts and edits on that. It’s actually been pretty busy. At first in quarantine, there was a lot of helplessness, with so much stuff cancelled and gigs are cancelled and you’re like “Whats happening”. And after kind of breathing a little bit, I realized my privilege and the fact that I’m healthy. Just make the most of a situation. So that has been my attitude during quarantine.

A: I know a lot of people who have picked up their instrument for the first in a long time! Do you have any advice for someone who's looking to get better at an instrument during quarantine?

E: Just be patient. Learning an instrument doesn't happen overnight. It’s like weight loss. Like everyday, you have to work out. You gotta be honest and check in with yourself. It can be a very grueling process to learn an instrument, but once you get there. Its’ the most rewarding thing. And the thing is, even once you get there, I have to practice everyday. And If I don’t practice, I notice and am like “oh god, what happened?” And of course other people wouldn’t notice, but I feel it in my muscles and in my fingers. There’s a discipline that is required. That I think, that is very tough to acknowledge in the beginning because you want to play right away, so that's my advice.

A: There’s a lot of things going on in America right now (regarding Amy Cooper who frantically called the police on a black man bird watching in Central Park and George Floyd who was killed by Minnesota Police officer Derek Chauvin). How are you preserving your mental health?

E: If you would have asked this question a few days, it would have been a whole different situation. But now with George Floyd. There’s a lot of sadness and a lot of anger and a lot of frustration. Before the Amy Cooper/ George Floyd and a lot of the subjects that are coming up in the news. I’d kind of been avoiding the news. I was just doing my little New York Times check when I cook dinner and that's it. But since, the new police brutality. It’s like, I have to be vigilant and do my job, I have to stay informed. I have to do my part. Contact the Attorney General. You feel helpless because it's quarantine, and you’re alone, and you’re isolated. But we’re all in this together, we’re all human beings, we all deserve the right to justice, and equality, and love, and happiness and I think when you remember that it puts so many things into perspective. Even with Covid. I feel like I forgot about covid because I’m so consumed with what's happening in the news lately. I’m trying to put myself towards greater purposes which I think is a healthy response. It’s really tough to stay mentally sane when the news can be so grim. I think you have to protect yourself, but also find the balance of staying informed. I’m still working on it. I wish I had a better answer.

A: No that's a great answer. We protect ourselves, we stay informed, and we still find that balance where we can still thrive mentally and emotionally.

E: Yeah, you said it perfectly. Let's put that.

Note from the Interviewer: We talked about the recent events in the news at the time focusing on Amy Cooper and George Floyd as well and the importance of staying informed and finding balance for the sake of mental health. I think it is important to note the date of the interview which was May 29th and to give some context as this was before many of the protests had started nationwide.