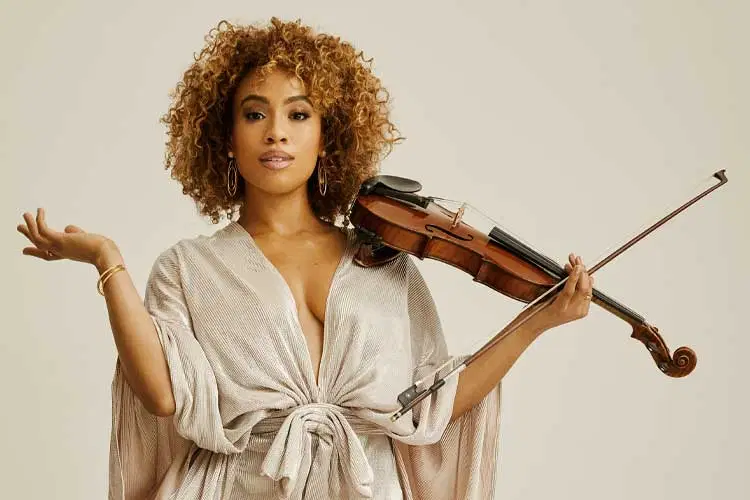 Read the article on Strings Magazine

That word and all it implies is at the core of how Ezinma-the inventive, electrifying, and playfully mononymous violinist and educator from Lincoln, Nebraska-sees her role as a fusion artist, her choices as a musician and teacher, and her purpose as a public figure whose popularity on social media is growing with every new track and video release.

“Being from Nebraska, with my dad being Black and my mom being white, I grew up in an environment that was very, very homogenous, and where I didn’t always feel like I fit in,” says Ezinma, speaking on the phone from her home in New York. “Growing up as a young violinist, I would have loved to have seen someone who looked like me doing what I’m doing now. To have been able to go on YouTube and have that kind of inspiration, I would have flipped out. So, being that for the next generation of musicians desperate for role models and inspiration is now a huge part of what I do and why I do it.”

Ezinma (eh-zeen-mah), who was born Meredith Ramsay, and whose professional stage name is often shortened by friends to Ezi, has also been dubbed “Classical Bae,” a moniker that speaks of the two musical worlds-classical and hip-hop-in which she has built her style and rapidly growing following.

Classical Bae also happens to the title of the EP Ezinma is dropping February 5.

“I really wanted to basically put together everything about my life into one project,” she explains. “Fusion is in everything I do. It’s in my DNA.” The EP brings together a quartet of tracks, each taking an iconic classical piece-Beethoven’s Fifth Symphony, the Spring concerti from Vivaldi’s The Four Seasons, Bach’s Cello Suite No. 1, and Beethoven’s Ode to Joy-and re-imagining them as highly danceable, hip-hop-infused mash-ups, each with its own slightly mischievous title: “Beethoven Pleads the Fifth,” “Vivaldi Springs Forth,” etc.

People really do need some happiness and some joy, musically, right now.

“I’ve had a lot of success online, virtually, and on social media with my covers of popular tunes,” Ezinma continues, “and I really wanted to kind of wrap that up with this project. I wanted to bring a really joyous fusion of classical and hip-hop, especially right now, given the time we are living in and the climate. With COVID and the protesting and the divisiveness in the country, I felt like this project needed to be as joyous as possible, and to make it a blend of these two worlds I love so much. That was the inspiration-a fusion of classical and hip-hop, of love, joy, and happiness. That’s what I set out to do.”

To add to the fun, Ezinma also dropped a Christmas track in mid-November to augment the holiday season timing of the EP’s release.

“The Christmas track is a really festive ‘Drummer Boy/Joy to the World/We Wish You a Merry Christmas’ mash-up,” says Ezinma. “It originally had some of Bach’s Christmas Oratorio in it. But that kind of made it a little bit too down. It changed the energy too much, so we took that out.”

According to Ezinma, the original plan was to release Classical Bae (Decca Records) in 2020, but given the pandemic and everything else, she and the producers felt it would be prudent to wait. “I think that’s turned out better,” she admits, “because people really do need some happiness and some joy, musically, right now.”

Of her approach to choosing which classical compositions to include on the project, Ezinma says she wanted tunes that were extremely recognizable. Maybe even tunes that were a little overly recognizable. “What I do in general, and it’s definitely reflected in this project, is about letting people who don’t feel particularly comfortable with classical music maybe find some access into that world through the way I interpret it,” she explains. “I wanted to pick stuff where people would say, ‘Wait! I think I’ve heard that before! Did I hear that on Little Einsteins?’

“That was the intention,” she goes on, “to grant that access to the classical world for those on the outside of it. And then there is the opportunity to reach those who are confident classical consumers, and then give them a taste of hip-hop. So it’s a kind of two-way street.”

Each track on the EP had a different development process. “Beethoven Pleads the Fifth,” the first track to be released as a single, had its origins in a choir sample. “It was this really epic choir sample that I found online,” says Ezinma. “That inspired everything. For the Bach track, I was just inspired by the melody. Honestly, that one is my favorite off the EP. I love that one so much.”

For that piece, Ezinma began by re-harmonizing the melody. “Then I started making a bit of a chorus, a melody to score over that repetitive figure,” she explains. “Once I finished a very solid draft, I sent it to my producer, and he went in and sort of did some restructuring,did some additional beat soundsbae sounds.

“We worked virtually,” she adds. “Some of the tracks I recorded at home, which is unheard of. Usually you do it in the studio, and everything is very high-tech, but I got these amazing mics, and we got it done.”

As Ezinma describes it, the response to music from her stalwart fan base has been extremely gratifying.

“The hip-hop fans keep saying things like, ‘I didn’t know classical music could be so cool,’” she says with a laugh. “Then, from the other direction, I’ve heard people say, ‘I didn’t think I’d ever like hip-hop, but now maybe I can.’”

She admits there have been some “haters.”

“Some people, of course, some classical purists, have said, ‘Why are you doing this? It’s so disrespectful! This is not necessary!’” she allows. “But even if there have been a handful of negative things, the majority of people have felt overwhelmingly positive about the project.”

As difficult as it has been for Ezinma to complete a major EP while under lockdown, Classical Bae is not the only project that has been altered by the COVID-19 pandemic. Her educational nonprofit, Heartstrings, was set to take a major leap forward this year, providing space and educational opportunities for a diverse array of musical students.

“It’s obviously not safe to have kids taking lessons together in person,” Ezinma notes. “But we have this space on the Upper West Side, made possible with some very generous donations. So I’m going to be very excited to officially open the academy once this is over, next year, maybe in the fall.

Heartstrings has been a passion of Ezinma’s for the last few years.

“It’s something I’ve been sowing the seeds for for a long time,” she says. “I love teaching. I got my teaching certification several years ago, when I first moved to New York, but I had to give it up because of my touring. I’m looking forward to returning to education, having that role in kids’ lives and being inspired by the students.”

Though Ezinma has been doing some Zoom teaching, she says it has limitations, though is certainly much better than no instruction at all. “Zoom is fine when you are talking about phrasing of metaphorical things, but when it comes to the nitty gritty-your elbow is a little bit offyour wrist is positioned incorrectly-that’s hard to fix over a ZoomSkype call,” she says.

Still, Ezinma applauds the many music teachers and the dedicated students who’ve persevered through the difficulties of shaping the future musical landscape. “I’m always thinking of future generations of players, and how to inspire them,” she says. “I really think that’s where our focus should be. The world is such a mess. It’s so divided. Everybody has their factions, and their parties, and their beliefs. But we have to be able to come together, and music is the way for me to do that.”

“Just looking to our future generations,” she adds, “is absolutely essential in order for us to have any sort of hope. These young players are where I find my own hope-and a lot of my own inspiration-for all of our futures.”